“Foosball” Or “Table Soccer”? A Brief Look At The History Of Our Favorite Sport

in Professional Foosball Table  ·  by warrior  · 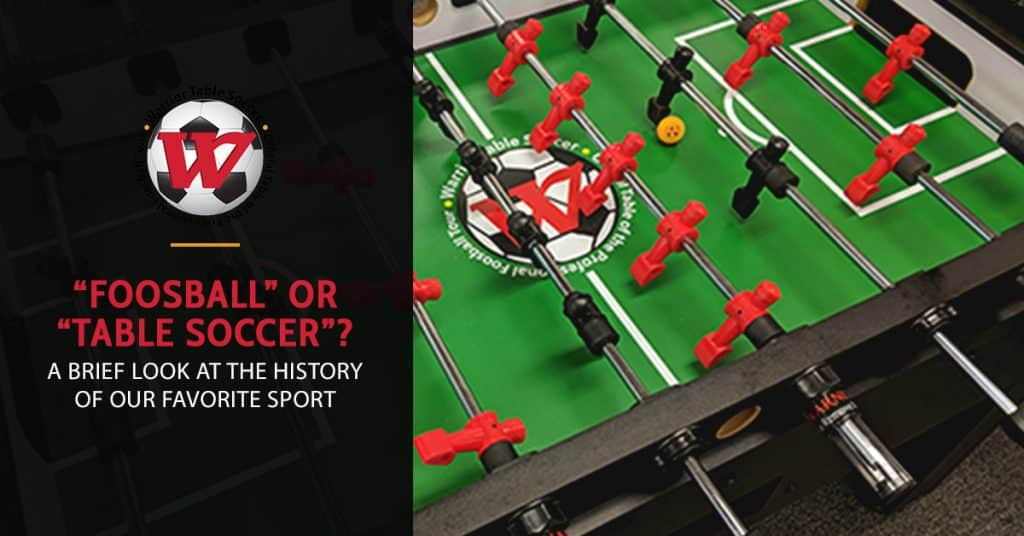 It’s a game that’s been played since the dawn of humanity. Okay, maybe that isn’t necessarily true, but what is true is that the history of table soccer is documented well before the game reached America. What’s rather interesting, and a little bit unfortunate, is that the history of foosball is also somewhat murky. Why do some players call the sport “foosball” while others religiously stick to “table soccer” or even “table football”?

Touching On What We’re Passionate About

In another blog post from Warrior Table Soccer, makers of the best-priced professional foosball table for sale, we’ll be answering that question and touching on the history of what we love to do. We weren’t the first to bring foosball to light, but we’re confident that we’ve perfected the foosball table as the world knows it. Here’s why.

Keep reading below to learn more about the history of this beloved game.

Foosball Supposedly Started Back In The Late 1800s

By “supposedly,” we mean that table soccer — as we know it today — probably did originate somewhere around the 1880s to 1890s, but the exact date is not clear. The sole creator of the sport is also hard to pinpoint. Some aspects of history are extremely well documented, but foosball does not appear to be one of them.

Foosball most likely originated somewhere in western Europe, and there are a couple individuals who have claimed to invent it. Lucien Rosengart, a Frenchman who worked as an engineer for the automobile company Citroen, claims that he created the game as a means of entertainment for his grandchildren during the winter. Conversely, Alexandre de Fiesterra, a survivor of the Spanish Civil War, once said that he came up with the original idea when he was recovering from injuries sustained in battle.

Here’s what we do know: According to The Complete Book Of Foosball by Johnny Rafols and Kathy Brainard, “The earliest United States patent for a foosball table was registered in 1901, but it is generally agreed that foosball, like soccer, originated in western Europe.”

According to Rafols and Brainard, put simply, the word “foosball” is actually an American “corruption” of the German word “fussball”, literally translating to “foot” and “ball”. This makes sense, of course, considering that what Americans know as “soccer” is referred to as “football” pretty much everywhere else around the world.

Now, what may not make as much sense is why the sport is called “table soccer” instead of “table football” or “table foosball,” but at the end of the day, there exist dozens of regional nicknames for what’s conceptually the same exact sport.

Though we’re confident that we make the best-quality, professional-spec foosball table for sale for the price here at Warrior Table Soccer, it’s true that there are different styles of tables used around the world:

Americans are all about power relative to gameplay. Typically, United States players use a solid, dense table made from Mahogany (or a similar material). The ball itself is usually made from a thick plastic, and the foosball men are usually made from a harder plastic than what you’d see in other tables.

The French typically prefer a linoleum surface with a characteristic “tacky” finish and a cork ball, meaning that foosball players sacrifice power in exchange for control.

German foosball (or fußall, should we say) also closely aligns with the French style of gameplay. However, German-style tables tend to be even softer, valuing optimal control.

Compared to the control-based styles of the Germans and French and the power-based style of the Americans, the Italians prefer more of a happy medium. Italian tables will use sandblasted glass for power, or plastic laminate to slow the ball down.

Foosball Or Table Soccer, Play On The Best Foosball Table For Sale With Warrior

Semantics aside, the love that we have for the game is something that’s shared all around the world, and we truly appreciate that here at Warrior Table Soccer. From our involvement in table soccer tournaments across the nation to selling the best foosball table for control, we’re no stranger to the sport. Thanks for stopping by our blog — we’ll see you out there!

Get a chance to WIN a FREE* Warrior Foosball Table!